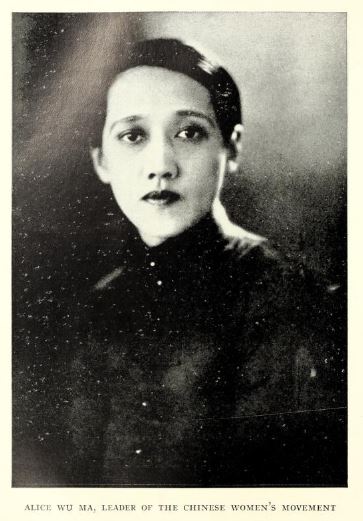 [p.63] We also went to the Wee-Golf (those miniature golf links set up in rooms and gardens, which, like jazz, are among the world wide American institutions), and there we watched gay Chinese women in men’s clothes courting other ladies, and saw Manchu princes of the original type of the dethroned emperor Hsuan Tung playing golf.

[p. 80] After the long-drawn-out wedding ceremonies that take place in both families (of which Tretiakov’s pupil has given us a vivid description) the wife or the husband avoids any physical contact and often manages cleverly to evade sharing home, table and bed. Most consistent in this respect are the bachelor girls of the province of Kwangtung, the centre of mulberry and silk-worm culture. In the region of Suntak they have set up homes where they take refuge shortly before or after marriage, so as to be with similarly minded mates of their own sex.

As they make a fair living by unwinding the fine threads of the silk-worm cocoons, they are economically independent of men. Some of them build a little house of their own with the companion they have chosen for life and make a home. The authorities in Canton have repeatedly, but so far unsucessfully, attempted to do away with this matrimonial comradeship between women, a custom which is not of recent date, but very ancient.